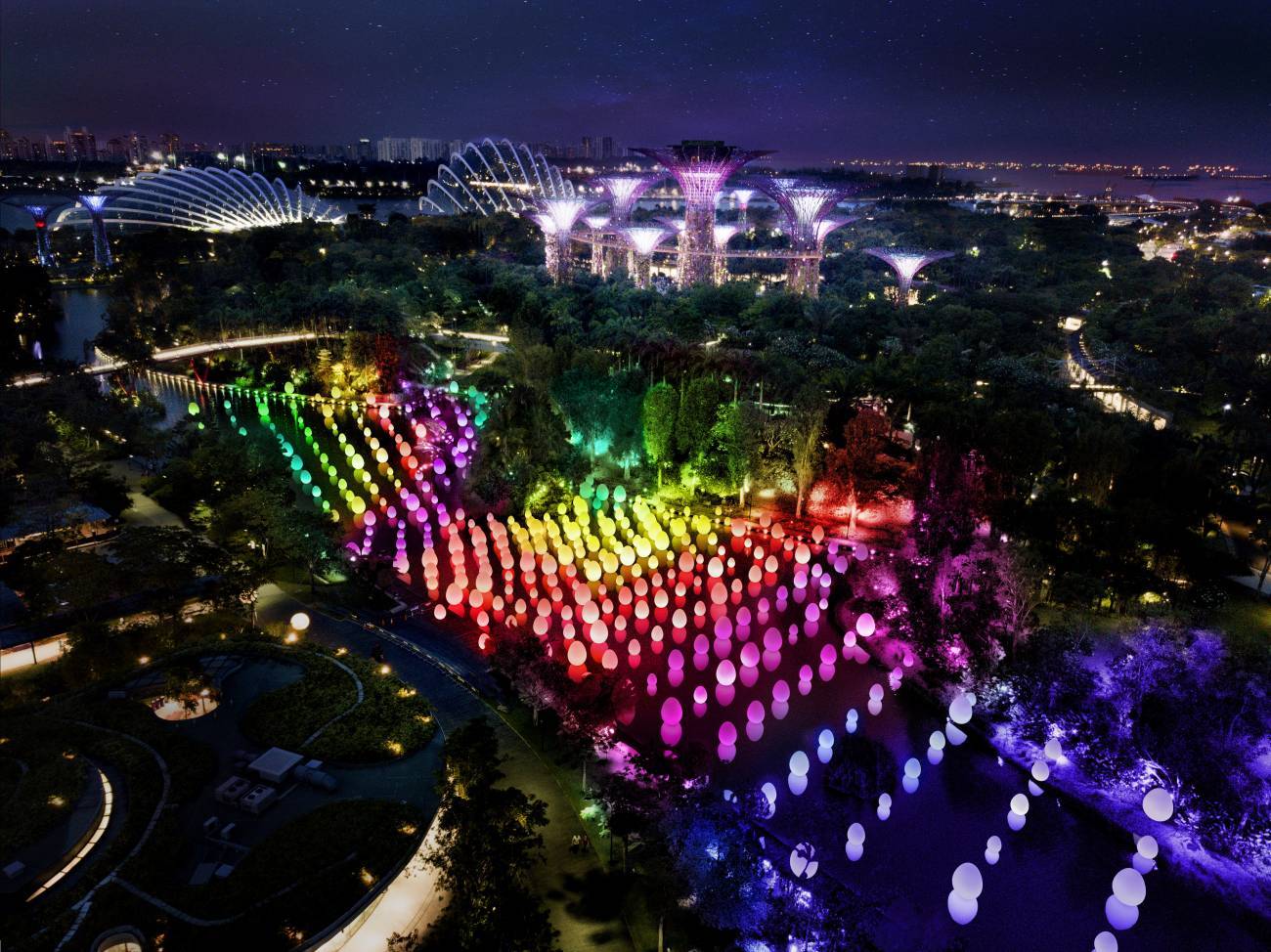 We’re sure you’ve heard of Japanese art collective teamLab—you know, the one behind all your friend’s artsy and fluorescent Instagram pictures taken at their previously famed Future World exhibition at Marina Bay Sands. Well, by combining technology and art they’re back and better for their #FutureTogether exhibition at Gardens by the Bay! The theme for this year is Aspirations, Connectivity and Possibilities.

The ovoids of light standing on the surface of the Dragonfly Lake shine brightly together with the trees on the lakeshore.

When an ovoid is pushed, the color of its light changes, and it emits a sound tone specific to that color. The sound tone resonates out continuously in the same way as the light, spreading throughout the ovoids and trees.

When a light resonates from the other side, it signifies the presence of people or local animals. Perhaps people will become more aware of the existence of other living things in the same space.

If you look at the pole of the Message Pillar through your smartphone camera using the Message Pillar smartphone app, you will see words floating around the pillar. If you use the app to write and post a message, that message will float together with the other previously-posted messages and join them to form a tree.

Flowers bloom and scatter for eternity on a giant latticed mass (15m high, 38m wide). A year of seasonal flowers bloom over the course of an hour, continuously scattering and changing. Flowers are born, grow, bud, bloom, and eventually scatter, wither, and disappear. The flowers are in a continuous cycle of life and death, repeating forever.

When people come close and move around, the flowers scatter. But when people approach and remain still, the flowers bloom more abundantly than usual.

The artwork is rendered in real time by a computer program. It is neither a prerecorded animation nor on loop, it is continuously changing. Previous visual states can never be replicated and will never reoccur

Animals with flowers growing on their bodies come and go. The flowers grow from the bodies of the animals, bloom, and in time their petals scatter, they wither and die. The cycle of life and death continues for eternity. When people touch the animals, the flower petals scatter. If people touch the animals too much, all of the flowers will scatter, and the animals will die and fade away. Animals inhabiting Singapore and the surrounding area bloom with flowers including local orchid flowers.

Flowers Bloom in an Infinite Universe inside a Teacup

Make tea and flowers bloom inside the teacup. Move the teacup or pick it up and all of the flower petals scatter and spread outside of the cup. Flowers bloom infinitely as long as there is tea. The tea in the container becomes an infinite world in which the flowers continue to bloom. Drink in the infinitely expanding world.

Throughout a year, each month’s seasonal flowers will bloom.

The work is rendered in real time by a computer program; it is not a prerecorded video. The artwork is influenced by the viewers, as their behavior causes continual change and transformation. This moment of the artwork can never be seen again and a previous state will never be repeated.

The Spatial Calligraphy rotates in the artwork space, every aspect rotating in the same direction, but depending on perception, it can appear to be rotating clockwise or counterclockwise.

Spatial Calligraphy offers a contemporary interpretation of traditional Japanese sho (calligraphy) in an abstract space. The artwork reconstructs Japanese sho in three dimensional space and expresses the depth, speed and power of the brush stroke.

Continuous Life and Death at the Now of Eternity II

In the flow of time of reality flowers are born, bloom, then in the course of time they wither and die. The flowers are eternally repeating the process of life and death.

The world of the artwork becomes brighter with the sunrise where it is located, and becomes darker as the sun sets. The flowers that bloom change throughout the period of one year.

The artwork is not a pre-recorded image that is played back; it is created by a computer program that continuously renders the artwork in real time. As a whole, it is continuously changing, and previous visual states are never replicated. The picture at this moment can never be seen again.

Legendary Rock Bands Scorpions, Whitesnake and Slipknot to Set 2020 as...